What are the secrets of underwater refrigeration?

Home / News / Industry News / What are the secrets of underwater refrigeration?
-->

What are the secrets of underwater refrigeration?

Freezing isn't just for food preservation. There are 5 specialized companies in the United States specializing in the business of preserving the remains of the deceased at -200°C. Many people live with the hope that they will one day be resurrected with the help of some kind of drug. The first person who chose to sleep in liquid nitrogen was the psychologist James Bedford, who was killed by cancer in 1967 at the age of 73, and since then dozens of others have followed his example, but nothing more Thousands of people signed contracts for "cold storage" after death. The bodies were stored head down so that if the automated control system failed, the head would be the part where the end would be thawed.
Completely different from the feeling of ordinary people, the refrigerator is not a "machine that makes cold air", but a device used to absorb the heat in the food. It uses a liquid called a "refrigerant" to "pump" the heat out of the food and move it out of the refrigerator. The refrigerant flows through a series of devices in the refrigerator, mainly including 3 basic components: compressor, condenser and evaporator, and repeats the same refrigeration cycle (approximately Carnot cycle).
Except for a few environmentally friendly refrigerators, most of the refrigerants in ordinary household refrigerators are Freon (mainly dichlorodifluoromethane), which is stored in the special container of the refrigerator. When the refrigerator starts to run, the motor drives the compressor to start working, inhaling the freon vapor at low pressure and normal temperature, and compressing it into vapor with high temperature and high pressure (about 10 atmospheres).
These freon vapors in a high temperature and high pressure state leave the compressor and are sent to the condenser. The condenser is a tube that has been bent many times, called a "serpentine", and is usually installed on the back of the refrigerator. Since the temperature of the freon vapor entering the condenser is higher than room temperature, the heat is dissipated through the wall of the serpentine tube, so that the temperature of the freon vapor is lowered and condensed from a gaseous state to a liquid state, and then it leaves the condenser and flows to the evaporator. . The evaporator consists of another serpentine tube that is in contact with the inside of the refrigerator. This serpentine is thinner than the condenser serpentine, so the freon flows faster and the pressure drops abruptly. This is in accordance with the so-called Bernoulli principle.
Due to the sharp drop in pressure in the evaporator, the freon evaporates violently, changing from a liquid to a gaseous state, and this process is accompanied by a decrease in temperature. Since heat is always transferred from hotter objects to colder objects, the hotter food in the refrigerator transfers heat to the serpentine tube flowing with Freon gas, thereby achieving the purpose of refrigeration.
After the above process is completed, the refrigerant-Freon gas is "ready to go" again, so that it can be "absorbed" by the compressor again, thereby starting the next cycle process.
Since Freon will destroy the ozone layer, it has been gradually phased out and replaced with other refrigerants, but the principle of their refrigeration is the same. 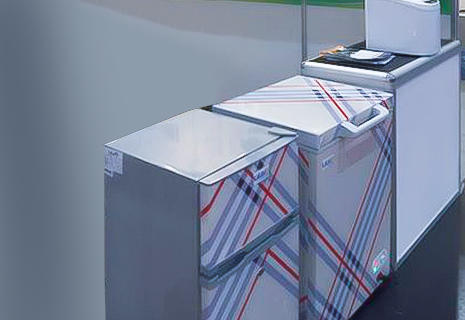